WHAT DO THESE PEOPLE HAVE IN COMMON ?

THEY ARE ALL PART OF THE UK'S COUNTER TERRORISM DEFENSE!

You do not need camouflage, nor to dress up like a SAS soldier.

Everyday people doing their everyday routines can help the fight against terrorism.

Being  observant  is not snooping or being nosey, spotting something out of the ordinary whilst at work, while exercising in the park, making a delivery, doing the shopping, they could all  save countless lives.

BUT WE ARE IN THE COUNTRYSIDE ?

We are in rural towns and villages, we are not in the major Cities, near airports or docks, big stadiums or major rail stations. Things like that do not happen here do they ?

The fact that our areas are rural, quiet, secluded, and with a lower physical Police presence makes our commuinity just the place for terrorists to make their bases. They can train, purchase equipment, build bombs, with far less chance of being spotted.

Supply of fertilizers and chemicals are common and go unnoticed here due to the farming community, where as in large major towns this would be unusual and cause interest.

We must not become complacent and believe we are free from terrorists, we must be observant wherever we live, as the examples below will explain.

ARRESTS MADE IN WALES

In February 2012 a 37 year old man from Pontardawe along with 3 others was arrested under the Police PACE Act  2000, section 16 of the Terrorism Act, in relation to being in possession of funds for terrorism purposes.

In March 2013 two men aged 46 and 39 were arrested in Newtown by Counter-Terrorism Officers from London and Mid-Wales following an operation tracking 'Tamil Tigers' terrorist movements. The gang were believed to have targeted more than 200 independent petrol stations in the UK in the previous year, where they approached night cashiers who worked alone at petrol stations, paying them large sums of money if they agreed to fit the cloning equipment to card readers and share information from customers. This money would be used as fundraising for an organisation, the Liberation Tigers of Tamil Eelam (Tamil Tigers).

In September 2017 four men were arrested, one who came from Powys, in relation to being members of a banned Neo-Nazi group.

In April 2015 a senior police officer reported to the Mirror, that Radical Islamists were attending training camps in rural areas of Powys, Ceredigion and Pembrookeshire. see link below.

If you see or hear something unusual or suspicious trust your instincts and ACT by reporting it in confidence at www.gov.uk/ACT.

SO WHAT SHOULD I LOOK OUT FOR ?

New neighbours who have rented a quiet house or building and act secretly, lots of visitors coming and going during the day or frequent deliveries of fertilizers or chemical containers.

The attempted purchase, presence or use of firearms when not justified, in gardens or woodland or being used out of hunting seasons.

Unusual photography or observation of government areas or buildings, presence of maps with such areas highlighted. Questioning locals about the same places.

There are many other signs that could be observed, but if you see something that you think could be suspicious DO NOT hesitate to report it. The Police and Anti-terrorism units would rather spend time investigating an innocent activity than not being informed and allowing a terrorist attack which could kill or maim many people.

Online video and Youtube particularly is now more popular than cable television. Mobirise provides a support for YouTube and Vimeo that allow you to liven up your sites.

It is important that you inform as soon as you possibly can, if you observe something in a shop, ask to quickly see the manager and explain the situation, asking him to contact the Police. If you are at home and notice something suspicious, either phone the Police ON 999 or use ACT's online reporting tool using the link below.

DO NOT ATTEMPT TO CHALLENGE THE SUSPECT YOURSELF.

ACT is run in co-ordination with the Neighbourhood Watch Scheme.

HOW TO TALK TO CHILDREN ABOUT TERRORISM

Talking to children about such serious things is difficult, this video and the links below will help you to discuss the dangers with your children. 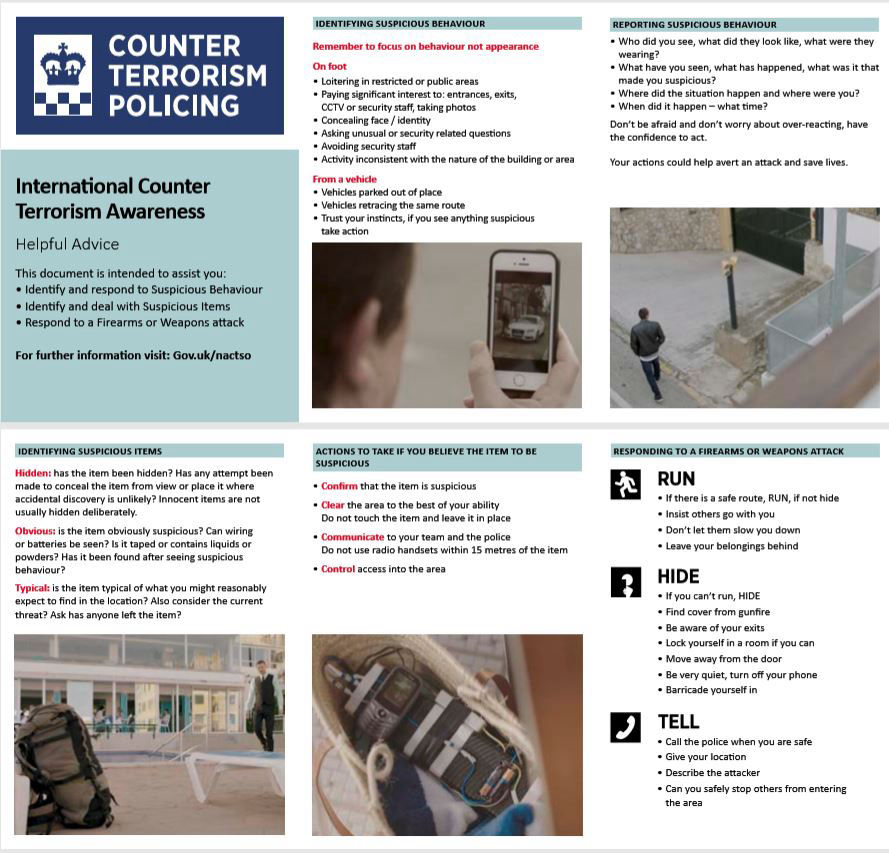 'They nmight find out I said something!'

Find out how Crimestoppers works and put your mind at rest!

WHAT HAPPENS WHEN I CALL ?

Only information is taken and recorded, not your name, not your phone number, not even what sex you are.